The HP 250 was designed to be a user-installable, multi-user system. It ran BASIC system software and could support up to 10 users. The original 250 came with an expansive cabinet that included a keyboard built in to the desktop and a terminal monitor that could slide along the desktop and swivel. The 250 came standard with 32K RAM expandable to 64K, dual eight inch floppy drives, HP-IB interface and a 2631A printer. The 250 used an HP-designed, 16-bit NMOS processor. Later part numbers for the 250 included 45252A, 45251B and 45260A.

In the middle of 1981, HP introduced a new form factor for the 250 to replace the original ergonomic design. The new pedestal models were lower cost and about the size of a two-drawer filing cabinet.

The original "desk configuration" 250 was obsoleted in August of 1982, after the introduction of the "pedestal" model 250s.

Click here for a detailed look at the origins of the 250. 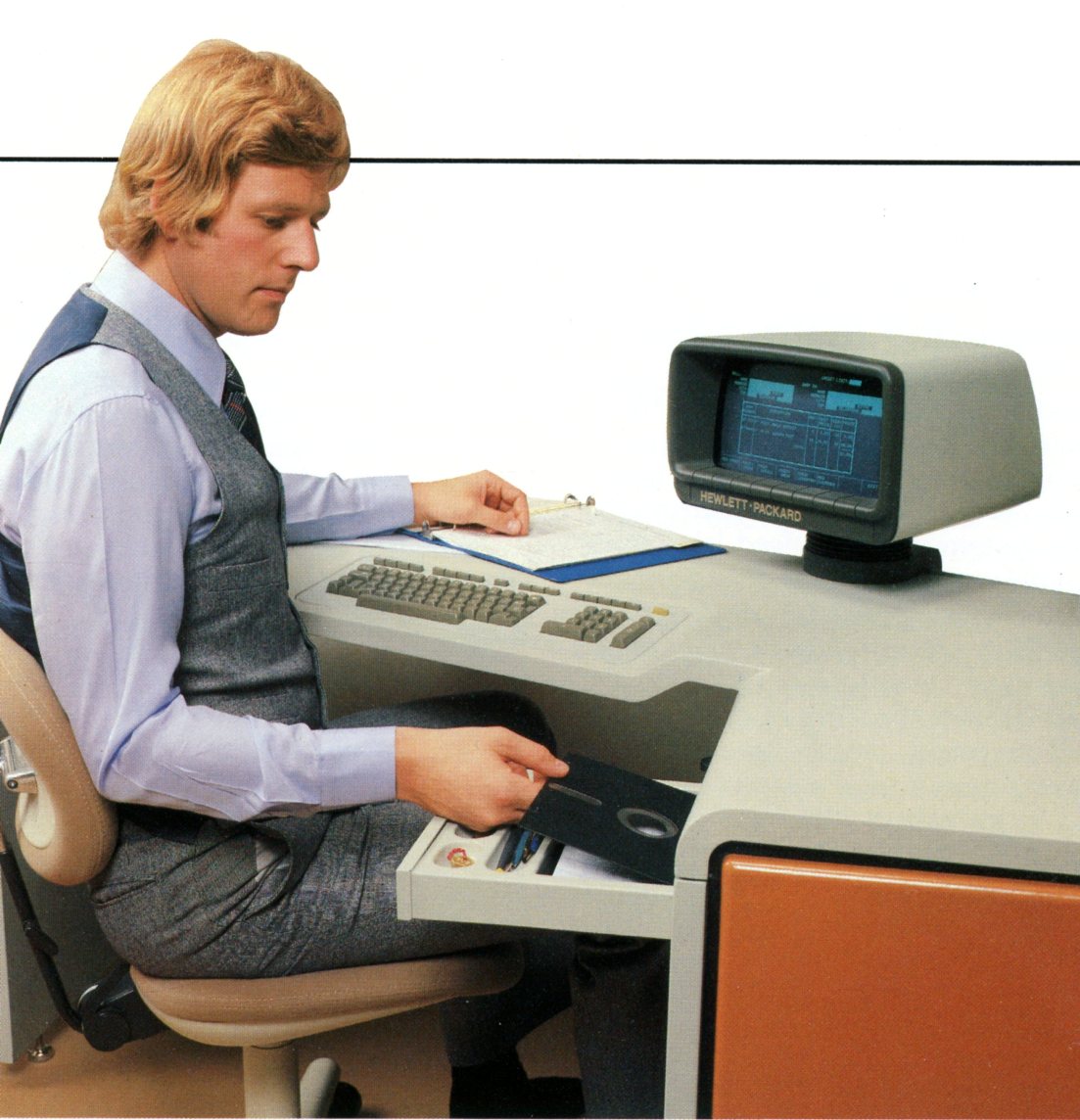 Unfortunately, you cannot boot a 250 unless you have an integrated terminal (that came standard with the early "big desk" models) or a 2622D or a 2649D. Only these three terminals will work. No other 262X or 264X terminals (or any other terminals) will allow you to boot your 250. The 2622D and 2649D have special ROMs that the 250 operating system looks for when booting. The boot process will not complete if the ROMs are not found on boot up.

The 250 is designed to communicate with "workstations" and with "terminals". "Workstations" are the three consoles identified above. A "workstation" is required for the 250 to boot. Once booted, the 250 will happily communicate with almost any terminal including 262X, 264X, 2392, 2382, HP 150, 700/XX, etc. Unfortunately, these common terminals cannot be used to boot a 250. By contrast, the 260 will boot using almost any terminal.

We spent over 150 man hours testing alternative terminals as "workstations" in attempting to get the 250 to boot. Below is a summary of our attempts:

What Happens:
- You can boot the 250 using either the boot disc for the 250 or the 8” floppy boot disc for the 260 (this disc can be made simply by copying the system files from the 3.5” floppy boot disc for the 260 to an 8” floppy disc using a 260). We get the best result when we use the 260 boot disc (this requires 1 MB of RAM in the 250). In this case, the computer outputs various messages to the terminal and states that it is sending output through port 1 at 9600 baud to what it assumes is a 2649D terminal (see photo under "More Images"). The 250 then goes through all of its system tests (MEMORY/ I/O, ASYNC, etc), then sends the message “LOADING DROMS”. The disc drive is activated for about 30 seconds while this happens. The 250 successfully loads the DROMS, checks for the default mass storage device, then hangs without executing the autostart file (AFIG). At this point, the terminal is locked and the 250 will not take input from it. We have confirmed that the 250 does actually load the DROMs successfully, then checks for the default mass storage device. If the boot disc does not reference a valid default mass storage device, the 250 will give an error message “MASS STORAGE DEVICE NOT FOUND” after the DROMS have been loaded. We confirmed this by intentionally setting a bad default mass storage device on the 260 boot disc (using our 260).
- The 250 will also boot from the 250 boot disc. This produces a similar result as when booting from the 260 boot disc, but we also get a long list of UNEXPECTED MEMORY messages. The 250 boot disc is configured to boot from a minimal system (it does not require the full 1 MB), so it lists out all the memory locations it finds that is wasn’t expecting. After listing the memory messages, the 250 sends the message “INTEGRAL WORKSTATION NOT PRESENT. – RIO DROM CHANGED TO AUTOLOAD”. Then the system loads the DROMs and hangs. Using our working 250, we changed the config file on the 250 boot disc to match exactly our machine's memory configuration and terminal/workstations configurations. However, this still did not allow us to boot the 250 to anything other than a 2622D, 2649D or integral workstation. You cannot use a 260 to change the CONFIG file on a 250 boot disc (after having booted the 260 from its own system disc). The 260 will not execute the file because of the different binary revisions used on the 250 boot disc compared to the 260 boot disc.
- You can do some testing for the 250 even if you do not have boot media. Even if no mass storage device is connected to the 250, the terminal will display the message “The system is waiting for the disc drive to warm up.”
- After the system hangs, we can’t get any terminal response. We have tried all combinations of RESET, SHIFT RESET etc but without success.
- After the 250 loads the DROMs and checks for the default mass storage device, it does not proceed to execute the autostart file (AFIG). Using our 260, we set the 8” floppy 260 boot disc to execute a simple PRINT statement, but the 250 refused to execute the PRINT statement. So, we know that the system hang occurs after the 250 checks for the default mass storage device and before executing the AFIG file (so close!).

For their age, 250 computers are still fairly reliable. Below is a list of boards and our experience with reliability (as of 2013):

Processor boards - 80% working. The most likely to fail are the earliest versions which have batteries (usually leaking) mounted on the board.

The power supplies on the 250 are still very reliable. Eight of the nine units that we have seen have worked fine. Before turning on your old 250, be sure to replace the two large (600uF) metalized paper capacitors on the connector board that sits on top of the transformer. These capacitors are likely to burn up if you don't replace them.