The 9845 was HP's high-end technical desktop computer of the 1970s until the introduction of the 200 Series in 1981. The 9845 was the first HP computer to incorporate a twelve-inch CRT screen. Previous computers had only one or three line screens. The large monitor of the 9845 made program debugging and program listing much more convenient. It also provided (optional) graphics display for the first time, with a resolution of 560 x 455 dots. The 9845A came standard with a built-in mini-cartridge tape drive (217K capacity). A second tape drive was optional as was a built-in thermal printer (80 characters wide, 480 lines per minute and graphics capable).

The 9845A shipped with 13K RAM standard, expandable to 62K. The computer came standard with four I/O slots and used the same interfaces as the 9825. The 9845S came standard with the additional tape drive, printer and graphics package. The 9845B replaced the 9845A in 1979. The original 9845B came standard with 56K RAM, expandable to 449K. Subsequent models could accomodate 1.5 MB of RAM. The 9845T also arrived in 1979. It came standard with 186K RAM and included the optional printer, both tape drives and the graphics package. The 9845C was introduced in 1980. It was the first computer from HP with a color screen. The 13-inch screen could display 4,913 colors. It also included both tape drives, the internal printer and a light pen. The monitor for both the 9845C and 9845T had eight programmable function keys. Click here to see this original green screen drawing the SINX/X function (file size 1.5 MB).

The 9845 was HP's number one revenue producing product in fiscal year 1980. In the previous two years since its introduction, the 9845 had also been one of the company's top five products.

The most comprehensive site on the web covering the 9845 is Ansgar Kueckes' "The HP 9845 Project". This outstanding site has almost everything you would ever want to know about the 9845, including some very useful troubleshooting and repair tips: http://www.hp9845.net/9845/. 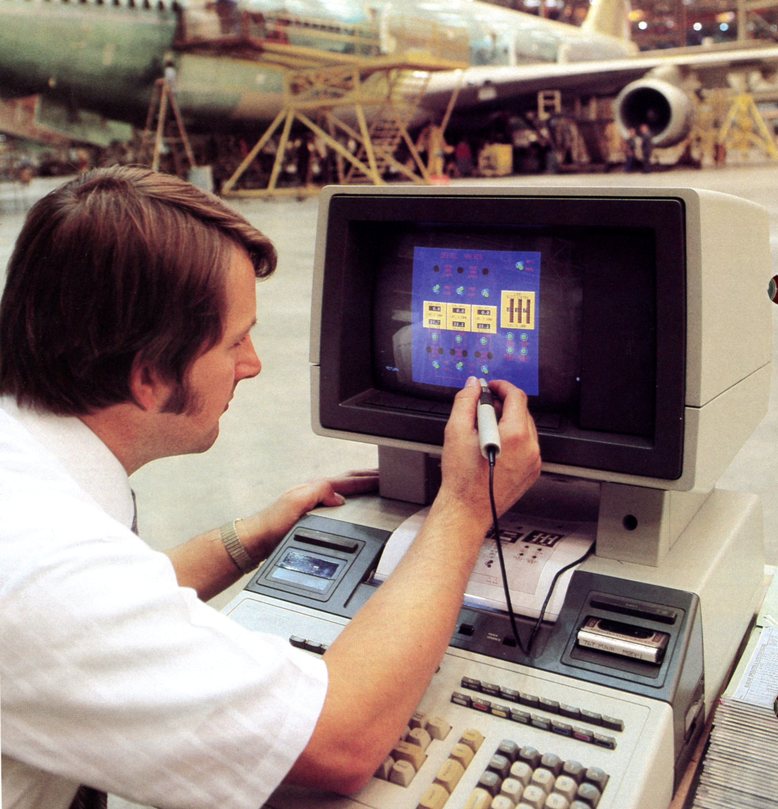 9845A computers are surprisingly reliable, especially compared to the 9845B. Two of the three units at the museum are fully functional as of 2014 (excluding the tape drives). Our third unit was mostly functional except for a bad power supply voltage. In 2014, we finally had some failures. Other than the power supply voltage and the tape drives, the only failures we have had have been with the ROMs that fit into the ROM drawers. The ROM drawers each contain four base system ROMS and may contain additional ROMs. When one of these modules fails you will probably get one of three indicators:

The contents of these ROMs have been saved by the very clever Ansgar Kueckes: hp9845.net. The ROMs that have failed for us are the right side (brown) system ROMs 2 and 3. We have also had two ride side (brown) and two left side (red) I/O ROMs fail. We have not had failures among the GRAPHICS or MASS STORAGE ROMs.

Unfortunately, the 9845B/T/C computers are not as robust as their predecessors or successors. This is probably due to their complexity. Of the eight units at the museum, four are "mostly" functional. Getting these four units going involved swapping parts between machines. The common problems are: defective tape drives (95 percent plus), defective or intermittent memory/ROM boards and faulty power supplies. Most 9845 monitors have some degree of "screen mold"; this is unattractive, but these displays almost always function properly. All eight monitors at the museum work, including graphics capability. The "screen mold" is not actually mold, but a degradation of the glue layer that holds a glass cover onto the monitor CRT. A procedure (including photos) for fixing this problem is outlined on the 9835 page. There is a rotary brightness control knob on the right front underside of the mono monitors. If you are not getting output to your CRT or the output is dim, be sure to turn this knob all the way clockwise.

The most common problem to afflict power input is bad metal foil capacitors, which are prone to smoking (either in the power supply module itself or in the IEC plug filter). Fortunately, these are easy to replace. These capacitors should always be replaced before powering up any 9845 that still has original capacitors. Usually, the power supplies will still work even after the plug filter has smoked out.

The 9845T/C has a different power supply than the 9845B. The newer power supply is more reliable and all three units at the museum are fully functional. The 9845B/C power supplies can be used in the 9845A/B.

About 70 percent of the museums’ memory boards work. The LPU, CRT and PPU boards are fairly reliable (80 percent plus). The most vulnerable boards appear to be the PPU ROM/RAM board and the printer control board. If your 9845 appears to work fine but won’t access external disc drives (even though it will print to external printers), it’s because your PPU ROM/RAM board is going bad. The PPU ROM/RAM board is the least reliable board in the 9845B. Twentyfive percent of our units work. The motor drive board is the next least reliable board with perhaps forty percent being operational.

When attempting to get a 9845 going, it is very handy to have a spare unit around for component swapping. The memory problems can prevent the machine from booting up, or they can be more intermittent. One of the museums 9845B has intermittent memory. It beeps during boot up. The printer prints out an extensive list of defective memory locations. Pressing the rest button to reboot the machine a few times usually brings it to life, and it contains 384K RAM.

9845 ROMs (that plug into the ROM cages on either side of the computer) are very reliable. As far as we know, all 30 or so ROM modules that we have work. You need the GRAPHICS ROM in the right cage of the 9845 to get graphics output to the CRT. The ENHANCED GRAPHICS ROM is not a substitute for the GRAPHICS ROM. It is only for use with the 98780A large monitor.

Previous generation HP desktops (98X0, 9825) are easy to work on with simple access to internal PCBs and other components. The 9845 is more difficult because the monitor must be removed and replaced to test just about anything. To replace the monitor, you must extend it at arm’s length while holding it slightly above your head as you hunker down and try to align the connectors on the underside of the thing to its base, a process that can require some dexterity. Since the monitor weighs about as much as a bowling ball, you don’t have all day to get those connectors aligned. The 9845s are probably the most delicate machines in the museum.

Two of the three 98780A monitors that we have seen were mostly working when we got them (these are the large head monochrome monitors with the function keys that go with the 9845T). The third was completely dead. Some resistors on the sweep assembly (p/n 98780-66514) run fairly hot and most of these boards have heat discoloration near these resistors. The 66514 board has four of these resistors (HP p/n 0811-1854). These resistors are 50 ohm 6W wirewound resistors with 3% tolerance. On our 66514 board, we replaced these resistors with 47 ohm 7W resistors with no ill affects. The new resistors still ran warm, but not as hot as before. Shortly after initial power up (while applying slowly increasing voltage using a variac) another small resistor on this board overheated and failed (smoked out). This resistor (HP p/n 0812-0039) is right in the middle of the board. Its specifications are 2.2 ohm wirewound, 6W with 3% tolerance. We replaced this resistor and our board worked fine thereafter.

The museum has an extensive collection of software available for download for these computers. Click here for the software listing.

Be sure to visit Terry Burlison's site for a collection of terrific old 9845 games.